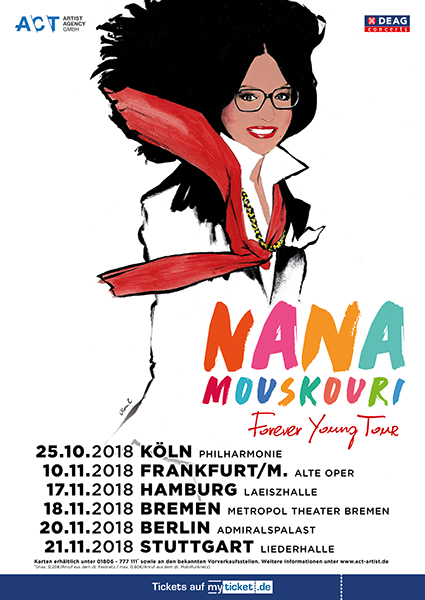 In autumn 2018 Nana Mouskouri celebrated the start of her “Forever Young” tour in the venerable Philharmonie in Cologne. As soon as the Grand Dame from Greece entered the stage, the entire hall rose and applauded for minutes. Standing ovations already at the beginning, what a concert prelude! Similar scenes also took place in other cities such as Frankfurt, Hamburg, Bremen, Berlin and Stuttgart. A complete success.

Great respect for one of the most successful artists in the world, paired with great joyful expectation; and this was not disappointed. Accompanied by her wonderful band, Nana Mouskouri sang the best songs of her extensive repertoire. She started with “Seven Black Roses”, “To paidi me to Tambour” and “Forever Young” from her current album to “Songs That Love Wrote”. Every song was celebrated frenetically, standing ovations again and again. Of course, the “White Roses from Athens” and “Plaisir d’amour” could not be missing. Also “Amazing Grace” as well as the sensitively interpreted song “Love is a losing game” by Amy Winehouse inspired the audience. One of the absolute highlights was “Le Ciel est noir” by Bob Dylan. This piece rounded off an extraordinary concert evening full of wonderfully presented songs.

Accompanied by rare video recordings of her eventful life and embedded in tasteful light, the artist celebrated an extraordinary evening. After almost two and a half hours of music enjoyment Nana Mouskouri left the stage touched and among numerous “Nana, we love you” excursions.

Hermjo Klein is proud to accompany this great world star and after Madonna’s most successful araatis for decades as a promoter.